Greetings to all our family, followers, and friends:

Praises – Welcoming and gracious camp, extended stay, great meals in the dining hall prepared by “Miss Peggy” and her staff; a wonderful welcome back to the Pilgrim Rest Baptist Church family.

Prayers – Continuing regardless of obstacles to meet and plan music ministry; complete healing of back problems; funds for roof repair.

On our way to Louisiana we had our first tunnel to drive through as we went through Mobile, Alabama.  We purposely avoided the interstate tunnel in Phoenix in December 2015, but we are certainly more comfortable driving now.  It was the peak of crawfish season here and we saw many “boats” in the fields, some were walk behind, others had a paddlewheel at the back, bringing in the harvest.  We arrived about the same time as our two other SOWER couples, finding to our surprise that both were from Wisconsin (our home state for many years) and we had attended church with the parents of one couple!  As usual there was instant friendship that deepened as we got to know each other better.  Our devotions in the morning were attended by staff and other volunteers as well as our breaks, and there were plenty of snacks and meals that we were blessed with.

We reconnected with Pilgrim Rest Baptist Church about a block away (we were last here in November 2015).  We joined in with their Sunday School, service, and evening service as well as attending a movie night, and salad supper.  We were able to play for their Easter Sunrise Service on the island at the camp, as well as a concert March 18 with a “wee bit” of Irish music followed by ice cream, of course!  It was wonderful having lots of space to set up and practice in our trailer.

Our work was very physical here.  The ladies finished painting the outside of the lodge (hotel) room doors and trim (final count 30 1/2, both sides of one door) with one coat oil base primer and two or more coats of latex paint.  Connie removed the hardware and numbers, painted most of the lower trim work, and reinstalled the hardware at the end.  One of the other ladies did the “rolling” and the other the upper trim work since she didn’t need a ladder!  There were several stiff and sore mornings from all the kneeling and stretching. 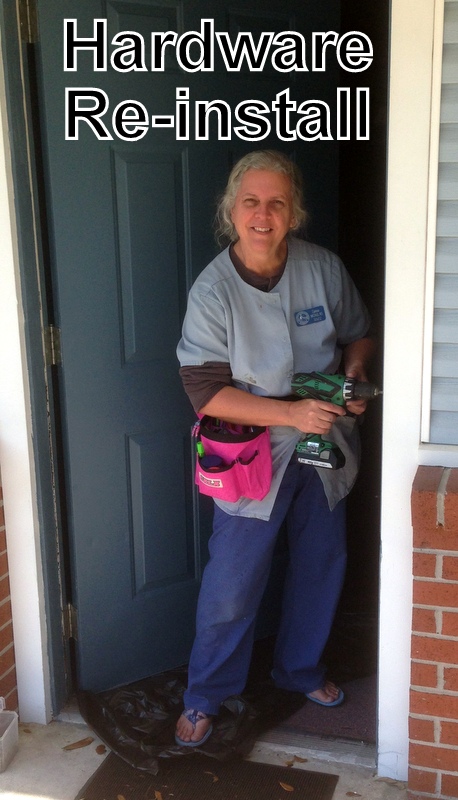 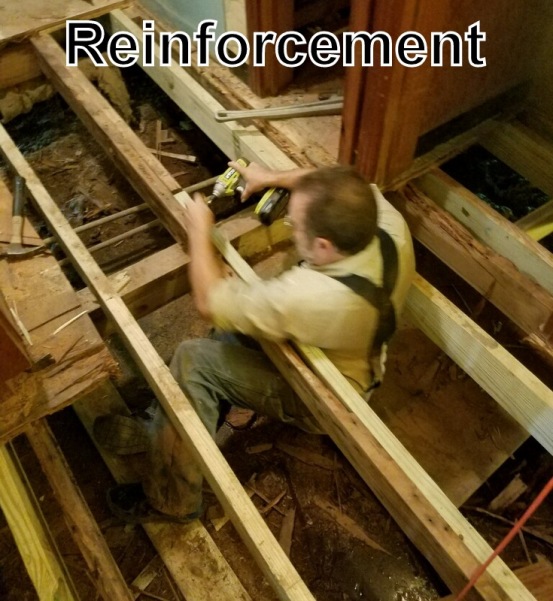 The guys worked together at a house with rolling floors to replace the floor as needed.  In Louisiana homes are built on slabs, on pillars, or as this one above the ground with little air flow.  In this area you also hit hard clay about 12″ under the mud muck so houses remain stable but any rain/mud eventually causes rotting.  They cut through two layer of flooring to find the joists and some beams needing reinforcement or replacing.  By the end of the project they had completed all the beams and joists in the majority of this 3 bedroom home and had all the 3/4″ underlayment done.  John was the smallest and got to shimmy around on his back “under” the floor, squeezing under the joists to twist and pound in the reinforcing or new construction.

We took several walks around the pond, fed the fish (largest was palm size), tried to feed the shy ducks, finally saw the baby alligator new to the pond, and Connie saw two snakes in the drainage ditch on a longer walk,  We were serenaded especially in the morning by our bright green trailer frog, were careful not to roll them up in the awning, and were more careful unrolling the awning as they went scurrying about.  There was springtime all around us as the azaleas, white fringe tree, yellow and eventually purple iris bloomed.  We went as a group into Eunice to the Prairie Acadian Cultural Center where we saw a film on the history of Acadiana and the people who settled in this area, listened to a Cajun band, and learned about  “Loozianna” cookin’ and enjoyed shrimp etouffee (et-2-fay, similar to a highly seasoned cooked down stew over rice).  The camp director and his wife treated the SOWERs to a meal at Chef Roy’s in Frog City where we had fried alligator and eggplant fries as an appetizer, interesting and good.

All the conference center events were available for us to attend.  The first weekend was a marriage seminar and a Catholic engaged couples encounter (thought about our son and his fiancée as they have done this).  The second weekend was the ACTS men’s retreat (Catholic group:  Adoration, Community, Theology, Service).  The third was a ladies retreat with a wonderful speaker from South Carolina.  And our last weekend was another ACTS group, ladies this time.  Us SOWER ladies enjoyed this retreat and we all enjoyed the food!!

God has greatly blessed our endeavors to share our music ministry.  We have had several “business meetings” to dream and plan and pray about the directions to go.  John started making calls for taking a month off in July for ministry.  What a blessing and encouragement as we have reserved a place to stay and have five programs on the calendar already.

“Our” plan was to leave on Tuesday March 27 to head to our home church and camp at Little Galilee in Clinton, Illinois for Easter.  In His wisdom God had other plans.  As we were preparing to start the “pack up” mode John picked up his mandolin (probably the lightest case we have) and his back went out.  After a few days of heat and ice and Tylenol we knew we would have to cancel our travel plans and two music events for our home church (Good Friday and Men’s Fellowship).  Although painful and slow in healing this setback kept us in the warmth of the south instead of 20’s and 30’s in Illinois.  Trailers are not well insulated and we don’t have much for “winter” clothing!

For I am convinced that neither death nor life, neither angels nor demons, neither the present nor the future nor any powers, neither height nor depth, nor anything else in all creation, will be able to separate us from the love of God that is in Christ Jesus our Lord. (Romans 8:38-39)

For God so loved the world that He gave His only begotten Son, that whoever believes in him shall not perish but have eternal life.  For God did not send his Son into the world to condemn the world, but to save the world through Him.  (John 3:16-17)

Until next time, thanks for being a part of our adventures!

“. . . dedicated disciples, filled with the joy of the Lord.  Their commitment is to the local church, building up the body through music, testimony, and service . . .”
—Pastor Mark Swanson, U.M. Church, Wisconsin

“They are so congenial in the way they carry out their ministry.  I would strongly support their work, wherever they may be used to provide a message through music.”
—Rev. Glenn E. Skatrud, Retired Chaplain, Wisconsin

“. . . they have a wide appreciation for church music and sensitivity of worship preferences.  With vast experience in church traditions they will be an asset to you and a blessing whenever opportunity presents itself.”
—Pastor Thurl Charles VanKirk, Running Springs, California

“John and Connie are a great multi-talented team.  Their love of God can easily be seen in their music as well as their devotion to God’s work.  They truly are living their faith.”
—Rev. Irv and Mrs. Kay Case, Wisconsin